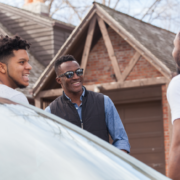 What is Embrace?  What does it look like in real life?

The Southern Territory has been making Embrace, a fellowship opportunity, available since January 2016.  (Download materials for FREE at www.saembrace.org.) Embrace is simply a way to get people together for meaningful conversation on a monthly basis and provide freedom for God’s Spirit to emerge.  It is a tool for cultivating authentic community.

The Embrace materials are simple – question cards around a theme to provoke meaningful conversations, plus a variety of structures that can help organize gathering together in a way that facilitates connection and community.  The idea is that a once-a-month meaningful conversation will be an encouragement, not a burden, no matter how busy you feel you are.  It’s something almost anybody can commit to doing.

Relationships are essential – and they take time, which is something many American women constantly feel short of.  It becomes easy to put friendships on the back burner while attending to other tasks.  This sacrifice of what matters is often unthinking – and devastating, when we are confronted with the cost.  After a friend their age died suddenly, women in their 50s, who were involved at Berry Street Corps in Nashville, TN for assorted reasons, decided to commit to a monthly get-together. Then-corps leader Sgt. Ernie Simms shared:

“The women realized that in their concerns for children, parents, work and mundane tasks, they had gotten out of the habit of spending time with their friends and of engaging in self-care.  The loss of their friend reminded them that tomorrow isn’t promised, so they needed to enjoy their friends and be there for their friends now.

The women committed to getting together at least once a month.  Each month, they do something different – it could be learning about nutrition and sharing a meal, making something together – or doing Embrace, and then sharing a time of prayer. The group doesn’t use the Embrace process every month, but has used it several times to promote deep conversations and to remember that the main thing isn’t the activity – it’s the friendship that matters most.

The women have been really encouraged by the fact that they keep getting together!  Just doing it is a success.  They are glad to enjoy each other, but also to be there for each other in struggles and hard times.  Finding out that they are not too busy for spiritual friendship has changed their outlooks and blessed them with a greater sense of connection and peace.”

There are lots of reasons Embrace gets started. Some of them include:

Ideally, Embrace meets in the homes of its members, once a month, with everyone taking turns hosting, which is almost how it works in Rock Hill, SC.   However, Embrace is a ministry tool, not a rigid mandate. If it works better to meet in a corps, like Atlanta Kroc, or to use it occasionally as the Berry Street Corps and Atlanta Temple have – then good!  The question is – “is it beneficial?”, not – “is it uniform?”

Although their Embrace practices look different, both Lt. Bethany Yocum and Lt. Rebecca McGee express satisfaction with the positive changes they’ve seen and recommend it to other corps.

“It’s a great way to break out of a rut in programming.  It’s really helped people get along better and complain less.” – Lt. McGee

“I share my struggles, and they open up more. We laugh, we cry.” Women who kept their distance in the past, began after a few Embrace sessions to say hello and now “take hugs all the time.” – Lt. Yocum

In Rock Hill, Embrace meets in alternating homes. Lt. McGee shared about how it works there:

Hosting: An Embrace host opens her or his home to the group for a meal that is followed by the conversation using the themed questions.  Hosting duties are shared, so the group rotates from home to home among the participants.

“We have four or five ladies who host, including me.  The host prepares a meal – it’s a Saturday brunch at 10 a.m. Some of the ladies have husbands, who do the cooking for the brunch, and so some men have started to come to Embrace – husbands and other corps men. Often ladies bring their children and they play in an area, but we can still do the conversation.” – Lt. McGee

Atmosphere and Participation: Embrace is designed to foster conversations that build connection and community. It is not gender, age, ethnicity or even faith-specific.  Since questions encourage people to share their lived experiences, everyone can. Participants can share how Jesus impacted them in a response to a question, but somebody without that type of experience can still participate.

Embrace is “not so structured that we don’t feel like we can’t have three toddlers this week because it’s not like crafts where they would get in the way.  Bringing their children is much more convenient for the ladies.

Embrace hosts tend to invite their friends and neighbors, “which is great. Right now, the friends of a host will only come when they know the host, but we’re hoping to get to the point where they’ll go to somebody else’s house too.

“More men have been coming and getting interested in coming.

“I think it’s a program that allows you to break out of the preconceptions about programs that we have.  People have ideas about what kind of people go to Home League or Men’s Club and decide they don’t fit that or they don’t want to be like that, so they won’t go.  But because [Embrace] is new, there are no expectations and it frees people up. Men, women, children can come because it’s just open to everybody, it’s just a chance to get together and talk about Jesus, which is what it’s all about, really.” – Lt. McGee

Planning: The main things to plan with Embrace are the actual dates of getting together, the best time to meet and the locations/hosts.

The Rock Hill Embrace group is committed to one Saturday a month, gathering at 10 a.m. for brunch and the Embrace conversation.  The overall duration is 2-3 hours.

At the start of the year, the hosts sit down with the corps officer to decide who will take which month. Then as the officer prepares the corps calendar for the next month, she calls the host to ask which Saturday she wants to take.  Lt. McGee will share about other events going on that can help the host to think about it.  Finally, the information is put on the corps calendar and anyone can attend.

“Last year we had it every month, including at Christmas time and through the summer, because it’s only once a month. There was one month when nobody could take a Saturday, but other than that, we’ve had it every month. We have a month coming up actually, where we’ll have it at the beginning and end of the month.”

Leadership:  Embrace leadership involves determining what format will work in your specific location. This involves decisions about hosting, day, time, openness of group and so on, as well as managing logistics of reminders, encouragement, assistance with preparation, bringing the cards, etc.

The questions of day/time/location are inter-connected.  Embrace may work best on a Sunday afternoon in the corps (Atlanta Kroc), meeting one Thursday evening a month for dessert at alternate homes (Chicago), getting together in public spaces (Atlanta Kroc), etc.  One thing to remember is that hosting is a time-limited leadership opportunity to prevent it from becoming a burden and providing an opportunity to develop people.

Embrace hosting is “a nice, easy transition to leadership. I’ve had [people] who didn’t want formal leadership and the pressure to prepare something on a regular basis, but they can take leadership with Embrace. It’s once a month (and you don’t host each month) and it’s very simple because you just use the question cards.” – Lt. McGee, who planned to encourage additional women to take on hosting responsibilities in the second year.

Embrace leaders can face challenges if members are used to traditional programs.  They may wonder where the projects are.  Lt. Yocum shares that Embrace can be a mental shift for Salvation Army women. Sharing that this is different for a reason is important. Also, it is helpful to share that if it is not for you, then there are other opportunities to engage: “It has been an interesting learning experience for all of us.”

The Embrace tool can help you to reach new people, as has been the case in Atlanta, GA and Rock Hill, SC. It also helps develop stronger relationships within the corps.  Embrace works well as a fellowship program and can be “tested” or “pre-launched” as part of an existing weekly program or a special event.  USA South creates the materials annually, including a leader’s guide, question cards and Powerpoint slides for announcements and background slides.  The materials are free and easy to use.  To learn more, check out www.saEmbrace.org