SEVEN LESSONS FROM THE GIRLS

After Frances 90th birthday, she and Mary finally got to telling me how the girls met. It was 1936 and AT&T had just completed its first round of new hires since the Depression started. The two of them met first at the doctor’s office for medical clearance to become switchboard operators. After Mary came out and Frances went in, the doctor screamed out, “Since when did AT&T start hiring showgirls?”

“We were gorgeous, you know”.

When I look at this photo of my grandma and three of her best friends (with a work friend and a semi-popular Broadway actor of the day), I think -why did women stop wearing hats?   I also think – what can we learn from ladies who were friends for seven decades?

We called them Grandma (Gen), Aunt Mary, Aunt Frances and Aunt Madeleine. They called themselves “the girls” no matter what their age was at the time. The friendship they had was powerful enough to be cherished by themselves – and the generations to follow. It sometimes seems to me that today people cannot understand the power of David and Jonathan’s friendship described in the Hebrew Scriptures because we are letting our culture distort all forms of intimacy. I could do a rant about the term “bromance” here, but instead I’d like to share a few lessons from the girls’ stories:

Frances and Mary met Grandma and Madeleine at the first day of training for switchboard operators. Since they were all new – and all the other workers had been on the job for nearly 10 years, they took advantage of a rough work schedule to forge a great friendship. They worked from 10 a.m. to 1 p.m. and again from 6 to 10 p.m. It was known as the “newcomers’ shift”. During the “break”, they picked up new hobbies. They learned to quilt, to manage a quick trek to Coney Island for a swim or even to go horseback riding.

Some of them managed to leave paid work for a few years while their children were small, but the hard work of childrearing and living in two different cities meant less time all together. However, they made a commitment that all the girls would see at least two Broadway shows a year together. (Broadway show tickets cost $2-$4 and weekly income for an average family was $60 at the time.)

Madeleine may have been overzealous on this point. One year, as the show approached, she realized she was a little closer to due on her pregnancy than safe and brought another friend (Peg McGady) with her. As the second act started, Madeleine grabbed Peg and the two ran for a taxi. Once on the road, the driver started to panic about a potential mess in his car and began to give advice, like, “Hey, lady, just keep your legs together”. Free advice is worth what you pay for it. Her son Eugene was born in the taxi.

Once all the babies were born (the rest in hospitals) and the older ones could mind the younger ones and leave the girls “in peace”, they took up a habit of playing bridge every Wednesday evening. Even when Frances’ family moved to south Jersey, her job in Newark and supportive husband allowed her to keep up the girls’ night by staying over at Grandma’s every Wednesday. The weekly tradition lasted until Madeleine died in her late 60s.

Mary and Madeleine married in 1937 and 1939, but the other two stayed single for quite some time after. The friends did not split into marrieds and singles, they turned into “chaperones” and singles on trips to Lake Hopatcong when they would rent a cottage for the summer. While the arrangement ensured no hanky-panky, it did not suit the neighbors entirely. There was still noise. A lot of it.

With their first baby safely snuggled in a bureau drawer for a good night’s sleep, Mary and John Thomas happily “led the gang in singing, dancing, jumping up and down and all around”. The echo from their house party over the lake meant their neighbors finally broke down one night and called the police. In the middle of the night, the whole group got arrested and dragged straight to an impromptu court. A local schoolhouse was opened, a judge convened, everyone paid a $10 fine and went home. To sleep.

Mary was the only Anglican in the bunch. The other girls were Catholic. When Mary married John, she invited all the girls, but my grandmother felt she could not enter a Protestant church as a good Catholic. Somehow she explained it to Mary in such a way that Mary believed her friend was both happy about her wedding and loyal to her church. Seventy years later, Mary recounted her friend’s decision respectfully.

Grandma became engaged to Jim around the time Mary had her first child. Although he was also Catholic – the two had met at the Holy Name Parade, an event known for marching bands, fashion, displays of faith and the beginnings of more than one romance, Jim was happy to accept the offer to be a godfather at the Anglican service. Grandma again politely declined to go. Many years later when the baby girl got married, my Grandmother entered a Protestant church for the first time. A decade or so later, a few years into their marriage, my uncle decided it would be best for his family if he converted to Lutheranism. Grandma did not throw a party, but she did not throw a fuss: “She’s a good girl with a real strong faith.”

When their children began to grow up, the girls started a tradition of providing bridal and baby showers. The first children were all daughters, but then one of Madeleine’s boys got engaged. She wanted his fiancée to have one too, but Grandma insisted the tradition was only for their daughters. Since Grandma had three eligible to marry and Madeleine only had one daughter, this led to a serious conflict. Frances and Mary saw Madeleine’s point and Grandma’s stubbornness. They decided to stay out of it. “The argument built up to the point where Mad and Gen stopped talking to each other, but we kept playing bridge together all four of us each week,” Mary remembered.

Eventually, Grandma went to Madeleine and apologized. But the tradition became firmly set – showers were for daughters only.

It was a resolution that still made no sense to Mary and Frances decades later, but it was not the decision that mattered – rather the relief that the friendship had persevered.

The end of World War II was something everyone was excited about, but for Mary’s family it meant her husband got laid off, so jobs could be given to returning veterans. Shortly thereafter, the landlord evicted them to give her son an apartment. They moved in with her parents in the next state and found work as a traveling sales team. Their sales of aluminum waterless cookware (bake a roast beef on your stove without water) were going through the roof – until a terrible head-on car collision with teenagers returning from a basketball game. John had a nervous breakdown; Mary’s leg was shattered and face was severely cut. Years later, their daughter recounted tearfully and gratefully seeing Frances being the first one to come down the walk to the house “full of tears and hugs”.

Frances, who had just married, and her husband figured out how to bring their friends back to Jersey City. None of it felt like charity: the husbands became good friends, John found a good job and knowing you have a friend “you can call anytime for anything” was healing.

Grandma never was able to marry Jim. He was never found after the second time he went MIA as a fighter pilot in the Pacific. A few years later, she did marry and have seven children, but the marriage did not take. As a result, the family had to move out of the house with the back-to-back yards with Madeleine. Meeting the basic needs of her family meant public welfare checks and private support. While her children felt the financial impact of the family break-up, it looked like mom delivered on Christmas and traditional vacations. The girls took care of the first Christmas. Even after grandma landed a secretarial job at a nearby prison, times were tough. Her friends ensured that her whole family could join them by crowding into vacation bungalows that they reached by way of the annual $50 junker-car. The support from her friends and good priests went a long way to helping grandma recover from the shock of having divorce happen to her.

Mary also took a lead in helping her friends’ daughters get their start on savings for college and family life. When she was ready to re-enter the paying workforce in 1953, there were only two jobs for women in the classifieds. One was for a dancer at the Harlem Burlesque and the other was for a waitress at the Broadway Diner in Union City.

Many years into the gig, since she was a great waitress – Mary was able to get her friends’ girls hired and train them personally: “They were all very good”. Since Grandma was not known for her cooking, Mary also squeezed in teaching them to make Pennsylvania Dutch potato salad and a Jell-0 mold with fruit. These remain the only two dishes my mother is asked to bring to anything.*

In the beginning, they were just a bunch of creative working girls on the same shift determined to use their free time well. In retirement, Grandma and Mary lived across the street from each other; Frances lived a few miles away, when she was not in Florida. The girls who didn’t fritter away time in their youth became the girls who made sure one of them had called the other by 10 a.m., just to check they were both still alive and ok. Decades of loyal friendship had made that possible.

What practices help you deepen and maintain friendships? If your life feels more mobile than the Girls’, what has helped you to continue to connect with friends and to nourish friendships? Share your ideas at saembrace@uss.salvationarmy.org. They may help us develop the next listicle. Include your name and mailing address for a shot at a gift card for coffee with a friend. 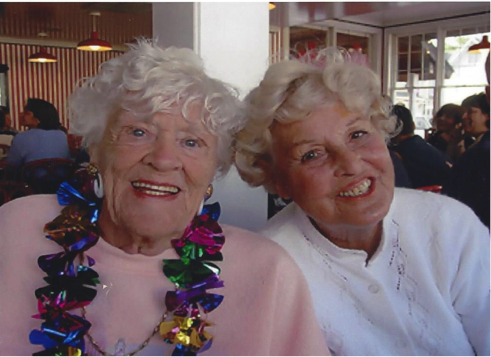 Postscript: The last photo I have with all the girls together was taken nearly 50 years into their friendship. Mary and Frances, pictured at Mary’s 90th birthday (she’s wearing the garland), enjoyed 73 years of friendship until Mary’s death at 92.  Frances, 98, joined her girlfriends in glory in April 2016.

Capt. Maureen Diffley is a program specialist for Women’s Ministries at USA Southern Territorial Headquarters in Atlanta, GA. Originally from New Jersey, she became a Salvation Army soldier in Richmond, VA. Capt. Diffley served in the Eastern Europe Territory until taking her first domestic ministry assignment in the Florida Division in April 2014.

Test Your Knowledge of The Salvation Army