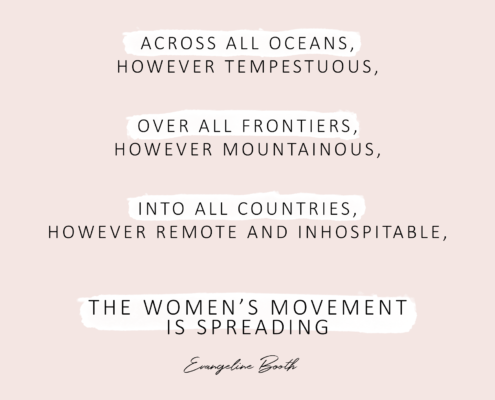 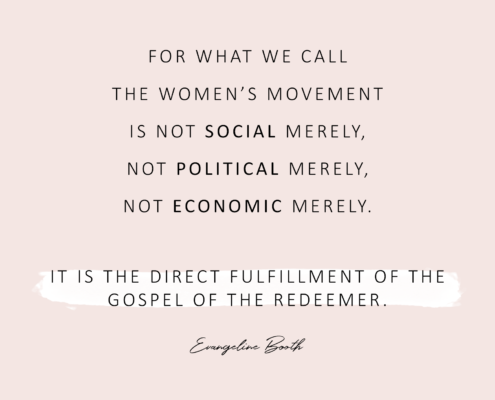 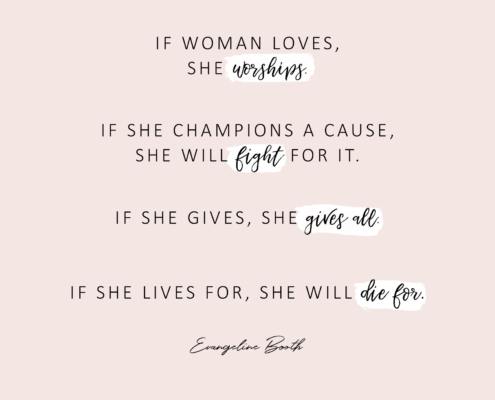 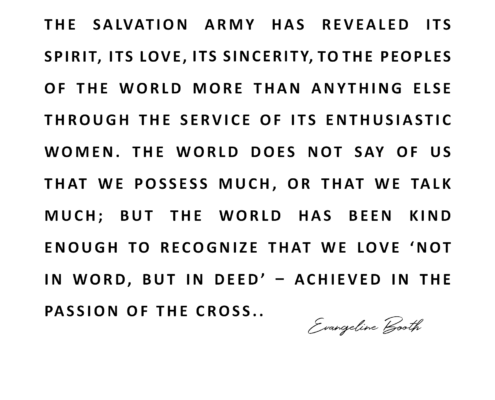 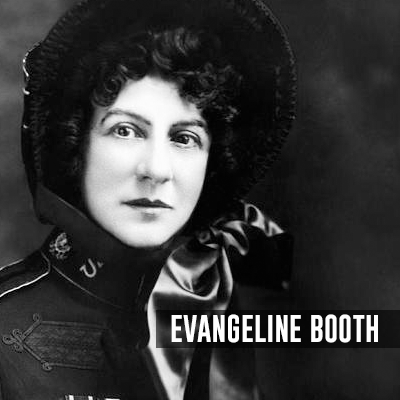 Never make Army music an end in itself; always make it a means to an end. Remember always that the founder’s one aim in recruiting music to assist in the Army’s great warfare was ‘souls first, and last, and all the time’

For the change that has come to women is a change, not in environment merely, not in wealth and habits merely, not in occupation merely, but in the very mind, the very being of the race itself. – Woman

Who can sing ‘O Boundless Salvation, Deep Ocean of Love,’ but that their blood tingles, their pulses fly, and their eyes become dimmed on recollecting that the words were inscribed by the inspired pen of my beloved father, our Founder? The lines of that song contain the Gospel he preached throughout the world – a boundless Salvation for all men. He declared it at all times, in all ways, in all places – in sermons, in conversations, in letters and newspapers, on sea, on land, in sorrow, in triumph and in trial, and in death. That Gospel is enshrined for all time in the clear, vigorous lines of his song. – War Cry, July 20, 1940

I have worked hard. I’ve made every sacrifice that has been asked of me with a smile in my heart as well as on my face. I would not change one day or take back one hour. You don’t get real joy from jewels. The joy from social attainments is nice but it soon passes. The joy of service to the poor and unfortunate is lasting and blessed. – My Best Men Are Women

The Salvation Army is a great empire, an empire without frontier, made up of a tangle of races, tongues and colors, such as never before in all history gathered together under one flag.

Now that woman has come into her own, what are we going to do with the sacred legacy some women have laid down their lives to leave us? The bars have been withdrawn; the gates are flung wide; woman has now to choose between the virtue of an opportunity used and the sin of an opportunity wasted – a kingdom of glorious realization or a kingdom of empty disillusionment.  – Woman

It is, indeed, the supreme triumph of woman that, in all ages, in all countries, she has fostered and safeguarded a faith in God. – Woman

If woman loves, she worships. If she champions a cause, she will fight for it. If she gives, she gives all. If she lives for, she will die for. – Woman

The Salvation Army has revealed its spirit, its love, it sincerity, to the peoples of the world more than anything else through the service of its enthusiastic women. The world does not say of us that we possess much, or that we talk much; but the world has been kind enough to recognize that we love ‘not in word, but in deed’ – achieved in the passion of the Cross. – Woman

As a woman, standing in the front lines of service to humanity, it is with an unbounded enthusiasm of gratitude that I hail the dawn of this long-awaited day of opportunity. The forces of prejudice, of selfishness, of ignorance, which have arrested the progress and curtailed the influence of womankind for centuries, are receding from the foreground of the future, and with astonished vision we look up on the limitless fields of progress. Across all oceans, however tempestuous, over all frontiers, however mountainous, into all countries, however remote and inhospitable, the women’s movement is spreading, the exhilaration and invigoration of its spirit is in the very air we breathe, bracing the nerves, stimulating the will, and reinforcing the faculties. – Woman

While one of God’s children wears the chain of servitude, womankind will accept no peace.  – Woman

For what we call the women’s movement is not social merely, not political merely, not economic merely. It is the direct fulfillment of the gospel of the Redeemer. – Woman

In the Salvation Army we see, as it were, the summation of the women’s movement, her equal status with man in social and spiritual and intellectual responsibility, her readiness to find a greater happiness in service than any selfish pleasure could have afforded. For, if woman has been successful, in inspiring mean to great deeds and noble aims, it is because she herself abounds with enthusiasm. – Woman

When you come to think of it, the Salvation Army is a remarkable arrangement. It is remarkable in its construction. It is a great empire. An empire geographically unlike any other. It is an empire without a frontier. It is an empire made up of geographical fragments, parted from each other by vast stretches of railroad and immense sweeps of seat. It is an empire composed of a tangle of races, tongues, and colors, of types of civilization and enlightened barbarism such as never before in all human history gathered together under one flag.

It is an army, with its titles rambling into all languages, a soldiery spreading over all lands, a banner upon which the sun never goes down – with its head in the heart of a cluster of islands set in the grey, wind-blown Northern seas, while its territories are scattered over every sea and under every sky. – The War Romance of The Salvation Army

…our Christianity is practicable. Few realize this as the secret of our success, and some who do realize it will not admit it, but this is what it really is.

We do worship; both in spirit and form, in public and in private. We rely upon prayer as the only line of communication between the creature and his Creator, the only wing upon which the soul’s requirements and hungering can be wafted to the Fount of all spiritual supply. Through our street, as well as our indoor meetings, perhaps oftener than any other people, we come to the masses with the divine benediction of prayer; and it would be difficult to find the Salvationist’s home that does not regard the family altar as its most precious and priceless treasure.

We do preach. We preach God the Creator of earth and heaven, unerring in His wisdom, infinite in His love and omnipotent in His power. He preach Jesus Christ, God’s only begotten Son, dying on Calvary for a world’s transgressions, able to save to the uttermost “all those who come unto God by Him.” We preach God the Holy Ghost, sanctifier and comforter of the souls of men, making white the life, and kindling lights in ever dark landing-place. We preach the Bible, authentic in its statements, immaculate in its teaching, and glorious in its promises. We preach grace, limitless grace, grace enough for all men, and grace enough for each. We preach Hell, the irrevocable doom of the soul that rejects the Savior. We preach Heaven, the home of the righteous, the reward of the good, the crowning of them that endure to the end.

Even as we preach, so we practice Christianity. We reduce faith to action. We apply faith to deeds. We confess and present Jesus Christ in things that can be done…

The military authorities sent word to the Salvation Army hut one day that fifty Frenchmen would be going through from the trenches at five a.m. who would have had no opportunity to get anything to eat. The Salvation Army people went to work and baked up a lot of biscuits and doughnuts and cakes, and got hot coffee ready. The Red Cross canteen was better situated to serve the men and had more conveniences, so they took the things over there, and the R.C. supplied hot chocolate, and when the men came they were well served. This is a example of the spirit of cooperation which prevailed. One Sunday night they were just starting the evening service when word came from the military authorities that there were a hundred men coming through the town who were hungry and ought to be fed. They must be out of town by 9:30 as they were going over the top that night. Could the Salvation Army do anything? The woman officer who was in charge was perplexed. She had nothing cooked ready to eat, the fire was out, her detailed helpers all gone, and she was just beginning a meeting and hated to disappoint the men already gathered, but she told the messenger that if she might have a couple of soldiers to help her she would do what she could. The soldiers were supplied and the fire was started. At ten minutes to 9 the meeting was closed and the earnest young preacher went to work making biscuits and chocolate with the help of her two soldier boys. By 10pm all the men were fed and gone. That is the way the Salvation Army does things. They never say “I can’t.” They always CAN.” – The War Romance of The Salvation Army