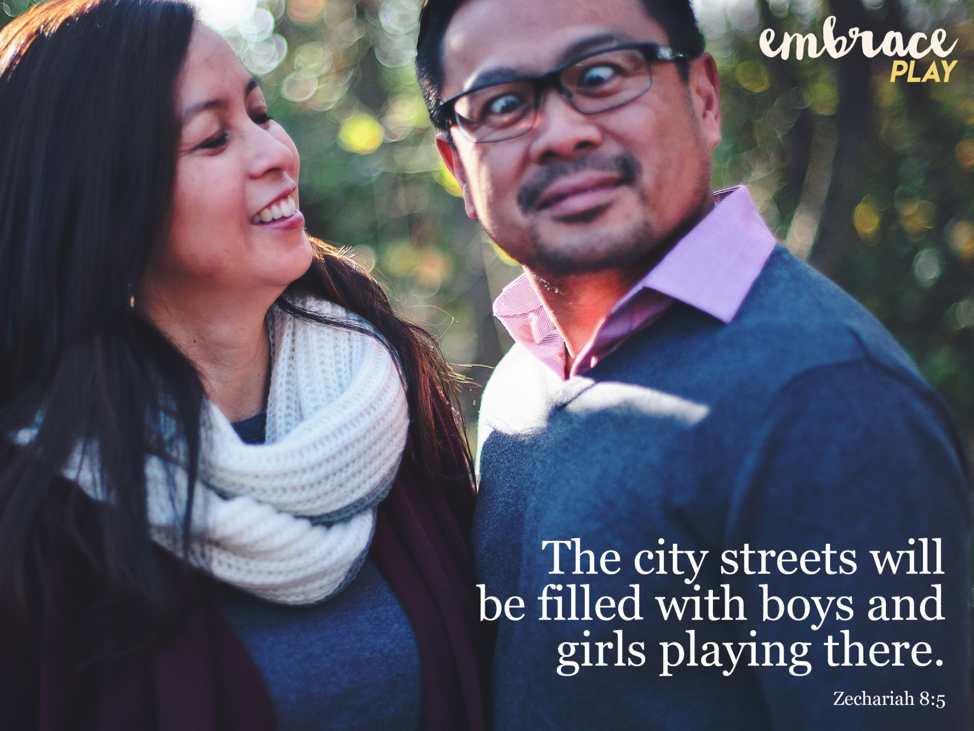 Play in Our Lives & Ministry

Many adults naively think that only children should play games and that they should be “grown-up” and very serious people.  This is fundamentally wrong.  Play is a very beneficial and necessary thing.  More than a great way to spend time or fun way “to do nothing”, play is an experience.  A person learns something, attains something new and previously unknown to her while playing. Play fosters unselfishness, freedom, the establishment of relationships and the release of emotional pressure and stress.  Play has great value!
The word for play in Russian is the same word that is used for game, and these words appear in the most ancient of languages. The Romans connected play and games with joy and fun, the ancient Hebrews with jokes and laughter.  Only the ancient Greeks called play a childish behavior – the literal translation of the Greek word is “indulging in childishness”.

Certainly, in childhood, play serves as a means of learning how to interact, to communicate and to develop a variety of practical skills.  There are many activities with a playful component in adult life too. Moreover, play helps people relate, rest, and enrich their leisure time. Not only a necessity in leisure and entertainment, play helps us practice and prepare before serious work. It can serve as an exercise to develop self-control. Games, when there are no material interests involved, do not need to seek utility.

Before going into more depth, it is necessary to stop and say a few words about gambling games, which are fundamentally different from those described above.  Gambling games, particularly in the technological world, have taken on a more negative from.  In the process of such games, interpersonal communications, creativity and the exchange of emotions are lost.  Just the opposite happens – people become closed and demonstrate aggressive and negative emotions.  A person playing a gambling game isolates himself and gradually his attitude toward the game and even his worldview changes. Moral principles are destroyed. The player winds up isolating himself from society.  The roulette table, slot machine and faceless people working in the casino, who start to seem like family, become one’s only companions. The risk and excitement that accompany the game are themselves fundamentally altered.

Healthy games and play accompany us throughout our whole lives.   When we are tiny, we participate in a wide variety of games that develop us.  For example, we play games to find hidden objects to develop our attentiveness.  We engage in riddles and quests to think more sharply and creatively.  We race to develop the speed of our reactions and the skills of strategy and planning. In these games our concentration, image-based thinking, memory, and social skills are developed.   Plus, while playing, we develop our inventiveness and release our imaginations.  As children, we experience freedom in this play.

Then games become more adult-like, and in the end, there is practically no time left for them, generally speaking. The adult is “formed” and games are just a way of resting.  Games and play are typically reserved for the time after a day full of work or school, but still greatly help to reduce stress and fatigue.

Whatever the case, we all play and engage in games, regardless of our age.  We use games in our everyday lives.  In my view, what is good for children is often quite good for adults.  Starting in nursery school, children are introduced to information through games and play. This is done to inspire their engaged interest in the educational activity – but the knowledge is transmitted as a kind of side effect.  This same approach is also useful for adults!  Psychological trainings and master classes are also structured along the principles of playful interaction, which allow adults to loosen up, feel freer and discard their complexes.

For these reasons, we try to include games in practically all our programs, especially in our ministry with children and youth.  At the same time, this does not mean that older people do not love games.  They do – and are very active!  We use icebreakers and introduction games that allow people to become acquainted with others.  Games that develop communication skills help people to overcome their natural shyness and create a friendly and productive atmosphere, which is so important to building community, are very helpful to us.  And, yes, with adults we still use games that develop attentiveness, trust, sharpness of thought and group solidarity.  We also find that playing games related to the themes of Bible lessons is a great help and we are able to make a happy transition from the game to the lesson.

Nowadays there are many resources about games. You can find a game for any situation and on any theme.  So go for it and – enjoy playing!!!

BONUS:  Of course, I want to share some Ukrainian games with you!  Folk games, as a rule do not require complicated equipment or training halls.  People played on the street and in the meadows and fields.  The required inventory was whatever was at hand: sticks, stones, beans, nuts and so on.  The most specialized equipment would probably be a ball (of wool, leather or rags), a broom and the like.  These games will be simple to replicate.  See below or download the PDF.

Captain Irina Hohotva serves as corps officer in Kharkov, Ukraine with her husband Sergei. The work in Kharkov includes ongoing aid to internally displaced people, as a result of war in the Donbass region and annexation of Crimea by Russia, an after-school program, senior center, and assistance to people affected by HIV/AIDS.  Prior to officership, Irina worked as an engineer. She and her husband have four children and one grandchild.

Description: Participants agree upon the boundaries of the playing field. You can choose the leader by picking a number out of a hat, drawing a short straw or something like this. The players form a circle.  The “leader” closes his eyes and stands with his back to the group some 15-18 feet away from it. He names any color – for example, blue, red, green. Then he turns around to the players.  Those who are wearing this color or an object of this color, point to it on themselves, which marks them “safe”.  Those who do not have clothes of the named color must run away from the leader. Whomever he catches becomes the new leader or “it”.  Then the process repeats (for as long as the game is interesting to the participants.)

Notable rule: If anyone runs outside of the established boundaries of the playing field, then that person automatically becomes the leader/”it”.

Players: usually children, aged 7-10, on a small playing field. (For example, the diameter shouldn’t be more than 30 feet if there are 5-10 players.)

Description: Like in the previous game, you can select the leader – the “heron” by picking a number out of a hat, short straw or something like this.  The other players are “frogs”.  While “the heron sleeps” – stands bent over with arms touching the ground and eyes closed, the other players jump in a squatting position, imitating frogs.  Suddenly the heron will “wake up” and give a scream and begin to catch (tag) the frogs. Whoever is caught becomes the heron.  Usually, this process is repeated five to six times.

The heron must chase the frogs on straight legs (no bending of the knees) while bent over, keeping at least one hand on the legs. He will need to take large steps to pull this off.

The frogs must be in a squatting position. If someone stands up, then she becomes the heron.

The frogs must stay within the playing field.  If someone goes out of bounds, he becomes the heron. 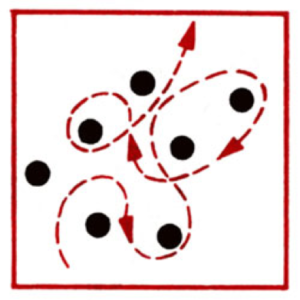 This game is played on a court or in a gym, and primary school children enjoy it the most.

Description: : Like in the previous game, you can draw the leader – the “needle” by picking a number out of a hat, short straw or something like this. Then a few volunteers, three to seven (depending on your overall number of players) join the needle to become the “thread”.  All the other players stand around the court/gym separately, not in groupings.   The players who have become the needle and thread join hands to form a chain, with the needle in front. The needle runs around and in between those standing (see the figure), taking unexpected turns, zig-zags and the thread must follow exactly. Anyone who fell off the chain has to pay a penalty, i.e. do something upon demand: sing, dance, recite a poem or joke, act out a scenario, etc.  The game can be repeated. Usually, after five to ten penalty performances, the game concludes.